Kiriko (occasionally allies with him in emergencies)

(is present throughout entire series)

(is present throughout entire series)
Kuroo Hazama, or widely known as Dr. Black Jack, is the main protagonist in both the manga and anime series. He is known as an unlicensed master surgeon who charges ridiculous fees to many people. He lives with Pinoko (and Largo in the 2004 TV series) in a house on a cape in Japan, overlooking the beach.

He is voiced by Akio Otsuka in almost every anime series, with the exception of Young Black Jack, where he is voiced by Yuichiro Umehara.

Nearly half of Black Jack's hair is white, supposedly due to shock and stress as the remaining half of his is black. (Most of it from being in such intensive care for most of his early life, and the emotional strain of having Mio Hazama (Black Jack's biological mother) dying and Kagemitsu Hazama (Black Jack's father) leave him and his dying mother. This is not necessarily medically accurate, but is the supposed story). The fringe from his hair hangs low enough on his face to cover the side of the face which has the large patch of mismatched skin and he hides it due to the fact some find this to be unsettling and give him an "unpleasant appearance". On the back of his head, it curls upwards. He has piercing brown eyes that also may appear to have a red tint. He is usually seen wearing a black cape that is nearly as long as he is tall. Under this, he wears a white collar shirt, a black vest, black dress pants and black dress shoes. He is almost always adorning himself with a blue, purple, or red ribbon in place of a tie. He is almost never shown without this signature outfit. Despite his scary appearance, he is considered to be a very attractive man by those who get to know him better, especially women and Pinoko is also very keen of Black Jacks appearance as she has the mentality somewhere close to an 18 year old, but this romantic admiration is not reciprocated by Black Jack.

Many people assume that Black Jack is a rude and soulless person because of his appearance, but in reality he can be a very compassionate and dedicated person. Although he charges absurd amounts of money for his procedures, he performs free surgeries on people who touched him with their kindness or struggles in life. He is very perceptive and able to diagnose a patient with only one look. Those who witness how he operates sometimes comment that his work is divine. Since Pinoko came into his life, he cares for her deeply as if she were his daughter and he gives her lots of (tough) love.

Throughout his life, Black Jack learned some harsh lessons and has to face the reality that there are times he cannot go against the forces of nature. In difficult and tricky situations, he is a quick thinker and is able to fool others easily (mostly with good intentions). Besides being an expert in surgeries, he is also a skilled combat fighter who makes use of his surgical tools (notably the scalpel) that he hides underneath his cape. Although, he is perfectly capable of fighting with his bare hands, even delivering a single knock-out punch to the stomach at one point. He also shows that he is highly responsible for his patient's safety and well-being, which explains his high pricing. He even goes to the lengths of deceiving his patients to make sure they heal properly. (E.g. A patient had a throat injury and was instructed not to sing. She disobeyed the first time around, so Black Jack told her that she now needed a special voicebox, and would only surgically implant it for her if she did not speak for a month. The supposed voicebox was a piece of a broken stethoscope, but the patient healed perfectly).

He also cares for and is deeply appreciative of people who change his life, such as Dr. Honma, who saved him through surgery once (this is what inspired Black Jack to even become a surgeon). Black Jack is also very prideful and hates being made fun of, or things he deems important desecrated.

21 years ago, Black Jack (as a kid) along with Mio Hazama (Black Jack's mother) were at a beach. While playing around, he found a half-buried bomb and accidentally triggered it, leaving him and his mother shredded almost to pieces. Even though the chances of surviving were quite slim, Dr. Jotaro Honma thought otherwise and began to operate. Black Jack also had lost a chunk of his face and therefore needed a skin transplant. At the time, there were no donors in the hospital, so Dr. Honma called upon his classmates to donate skin. All of them refused, except for one. An interracial child named Takashi and he donated skin to Black Jack, helping him out greatly. Although, Takashi had a darker complexion than Black Jack, thus giving Black Jack his signature two tone face (in the manga, he has a light blue side of his face instead. In later iterations, he is given a light brown half). Black Jack miraculously survived but unfortunately for Mio, she began to die after losing most of her organs and all four limbs. Moments away from death, Mio's last request was for Black Jack to forgive Kagemitsu Hazama (Black jack's father). Kagemitsu ran away to China with his new wife after the incident, leaving Black Jack growing up filled with rage and hatred towards his father. While Black Jack is treated at the hospital, he works hard to regain the use of his limbs without any help from the hospital staff and learns the meaning of struggle. Since that incident, he was feeling quite depressed, but determined to become a doctor just like Dr. Honma.

After being discharged from the hospital, Black Jack returns to school, but he is disappointed to find Takashi gone. Dr. Jotaro Honma raised Black Jack and eventually, he became Dr. Honma's best student. During his high school years, he skips classes and became somewhat of a delinquent as he often plays darts behind the school building and nobody befriends him during that time due to his "cruel" appearance and aloof attitude; even his teachers gave up on him. He was lonely until one day, he made friends with the school joker. Thanks to that, Black Jack was able to smile again for the first time since the incident. Still inspired by Dr. Honma, he pursues the study of medicine. During this time, his girlfriend contracted cervical cancer and he decided to operate on her, which got his medical license revoked by the head surgeon. After graduating, Black Jack opened his own clinic in a house on a cliff, overlooking the beach. This beach was home to a killer whale that Black Jack eventually named Toriton.

Black Jack is currently living with his adoptive daughter named Pinoko (and Largo the dog in the 2004 TV series), treating and performing miraculous surgeries on people while charging them with extremely high fees. 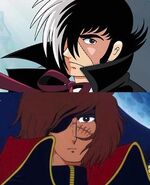